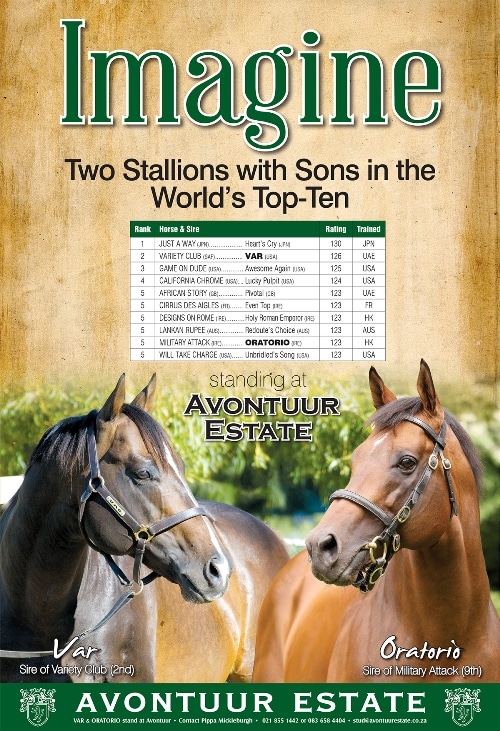 The champagne corks were popping at Avontuur this weekend with news reaching the beautiful farm just outside Somerset West that their stalwart stallion Var was leading the SA sires log on combined local and international earnings.

The son of Forest Wildcat has continued to produce the stakes winners on an ongoing basis from 1000m to 2000m this past season and an enthusiastic Avontuur General Manager Pippa Mickleburgh said she was pleased as punch.

The brilliant dual SA Horse Of The Year Variety Club ended the invincible local dominance of the Gr1 Champions Mile in Hong Kong three months ago when winning by four lengths and becoming the first overseas winner of the prestigious race.

And Variety Club is not finished yet! He is currently being rested at Mike De Kock’s base at Newmarket and will probably be aimed at the Prix de la Foret at Longchamp and then an assault on the Breeders’ Cup Mile.

An excited Pippa said that the season had been a success on all fronts.

“Where do we start! Obviously Variety Club’s terrific international successes will be what is remembered by most people for what he did in his herculean efforts in carrying the flag for South African horseracing. But then we also have that super Gr1 double by Via Afrika and Normanz on the Golden Horse sprint day at Scottsville. Then also consider the amazing amount of stakes and feature winners he had especially amongst his fillies.Which in the long run, with so many fillies earning black type and retiring to stud, can only help his future as a broodmare sire. It is exciting looking into the future and knowing that he has had such an extraordinary influence on the breed,” she said.

Pippa said that Var was fully booked this year and for 2015.

“He has enjoyed such great support from around the country and has a core of really loyal supporters,” she said.

The legend of Var has its roots in his arrival at Avontuur in 2005 and he has consistently produced tough and quality racehorses. He was represented by his 27th stakes winner on Saturday, when the brilliantly fast Schiffer won the Listed Umngeni Handicap. She is one of 12 stakes winners for Var during 2013-2014.

His top performers this season include record breaking Gr1 Champions Mile winner, and leading Breeders Cup contender, Variety Club, as well as the local Gr1 winners Via Africa and Normanz.

Var, the sire of 16 Grade One horses and counting, is strongly represented at the 2014 Emperors Palace National 2YO Sale. His five lots on offer include a filly out of a daughter of Gr1 winner Saintly Lady (Lot 42) and a three-parts sister to top sprinters August Rush and Miss October, as well as this season’s stakes winning filly She’s A Pippa (Lot 429)

With the arrival of the magnificent Oratorio, who stands at 16.00 hh, from Coolmore in Australia, will Var be taking a backseat?

“Oh hell no! He is still the King of Avontuur and he easily has another five more great years. He is in fine fettle and believe me he is very well looked after. Oratorio, who incidentally produced his first foal just the other day, provides a whole new dimension. He is a proven sire of international stakes winners all over the globe. He is going to provide us with our Met and July winners in the years ahead!” said Pippa confidently.

PrevPrevious27 Stakes winners for VAR to date!
NextAugust is all about women at AvontuurNext