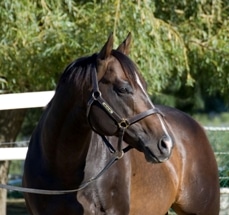 Avontuur’s brilliant sire, Var, is currently the leading active sire by overall earnings.  He is second on the general sires list to the deceased Jet Master, and Var’s offspring have earned over R6.6 million thus far.

Var’s runners this season include Horse of the Year Variety Club, who is unbeaten in three starts this season, and is likely to head overseas for a crack at the Breeders Cup Mile following his brilliant triumph in the Gr1 L’Ormarins Queen’s Plate.

Var is also the sire of sensational filly Via Africa, who followed up her oh-so-easy win in the Gr2 Tony Taberer Southern Cross Stakes, with a fine second to champion What A Winter in the Gr1 Cape Flying Championship. This race was won a year ago by Var’s great champion, Val de Ra – who defeated What A Winter in the process.

Other smart prospects representing Var this season include Contador, Sabadell and Valberg. All three look capable of winning features!

The son of Forest Wildcat is also the leading sire of juveniles thus far, and he is well represented in the season’s first 2yo feature – the Listed Summer Juvenile Stakes, run on Met day. His runners include the strongly fancied pair of Bold Var and Tour de Var-  two of the top contenders in the market.

Var has no fewer than five runners in this prestigious race, which has been won by such high-class performers as Captain Al, Great World, Sparkling Gem and Princess Victoria in previous occasions.

As would be expected, Var’s progeny were in great demand at the 2013 Cape Premier Yearling Sale.

The sky is the limit for this truly exceptional stallion!

Reproduced with thanks from Sean Tarry Racing, written by Sarah Whitelaw.