Val De Ra Does It Again! 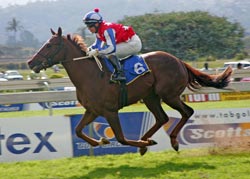 Speedster filly Val de Ra once again came through with flying colours on Saturday, 28 May in the R450 000 Gr 1 SA Fillies Sprint over 1200 m in Durban when she showed a clean pair of heels to win against serious contenders like Gibraltar Blue, Headstrong, Covenant and State Blue.
After losing this same race in 2010 (her only defeat to date!), she proved herself queen of the track this weekend with a scintillating win which honours the Highveld Sprinter of the Year award, which she won last weekend in Johannesburg.She is now a sure crowd favourite and set to draw attention and accolades wherever she runs in future.

Sired by champion stallion VAR (USA) out of  Minelli by Elliodor (Fr) and bred & owned by Avontuur Stud, Michael and Tara Taberer and Lindy White was on hand to welcome their filly into the winner’s circle and was understandably thrilled by this result.

Commented Avontuur GM Pippa Mickleburgh of the Dennis Drier trained filly, “She is such a wonderful sprinter and we are so proud of her. She clearly showed her detractors that she can hold up the pace over this slightly longer course and we expect great things of her!”.

The Avontuur team was also happy to see VAR colt August Rush performing well by coming a very close second in the Gr 1 Golden Horse Casino Sprint as well as another VAR,  Valmorne winning his race for the Azzie brothers earlier in the programme.

The weekend ended off on a high with a win in the Gr 3 Winter Classic on Sunday at Kenilworth for Chesalon , a Fort Wood out of Sarabande colt, also bred at Avontuur and trained by Mike Bass.

“It was a wonderful weekend for the VAR’s and Avontuur Stud and I’d like to thank all our loyal supporters, owners, trainers and jockeys,” she said.