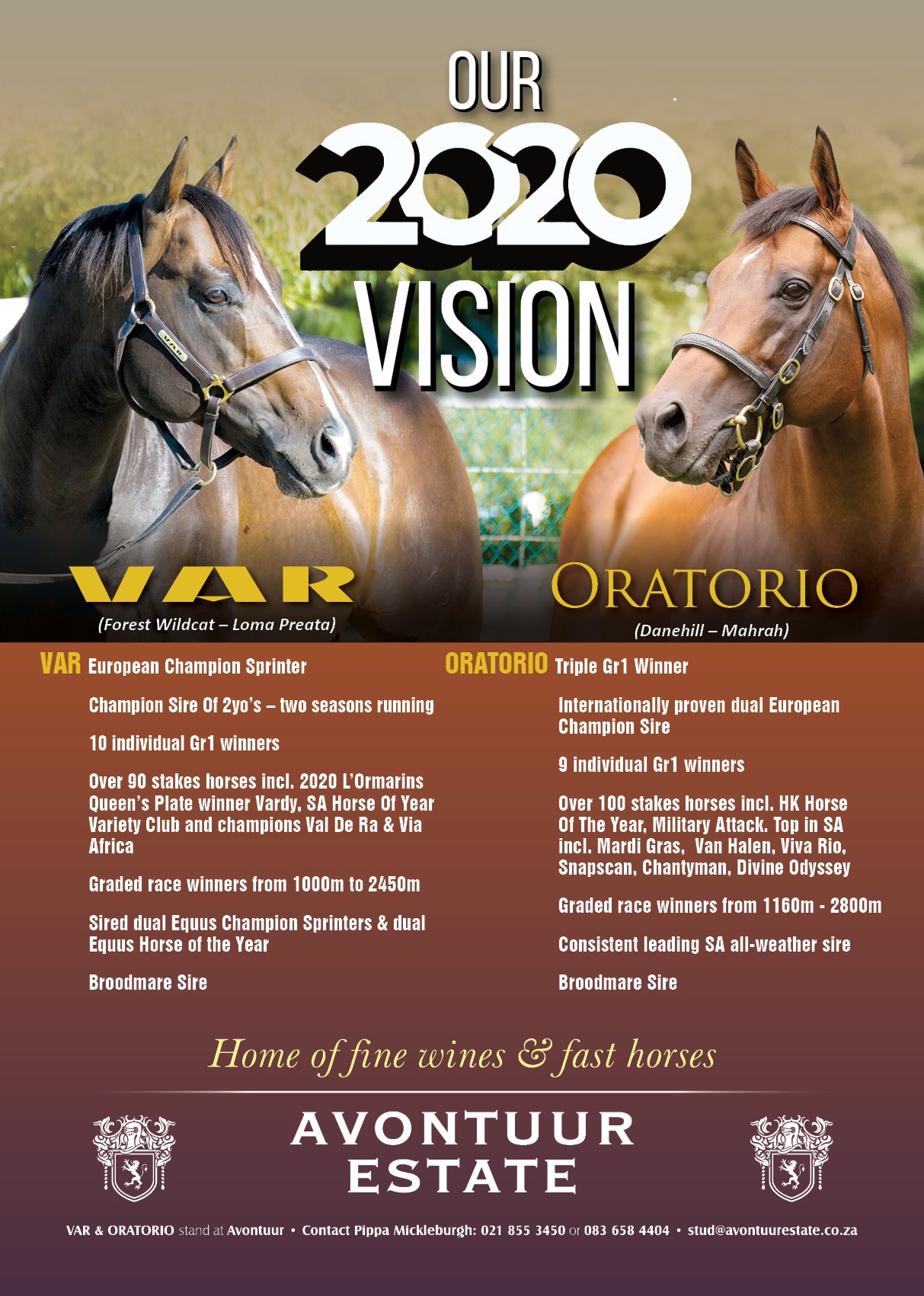 The group of Avontuur yearlings set for the National Yearling Sale in Gauteng in late April sport a list of sires which reads like the who’s who of South African thoroughbred breeding!  These obviously include our own Var and Oratorio and also two Silvano’s, a Soft Falling Rain, Rafeef and others.

Comments Avontuur owner, Michael Taberer; “We are very excited to present our NYS draft of Avontuur horses for 2020. There is no lack of quality, pedigree and physicality and with the majority of the selection being by leading stallions, we are so privileged to offer this group.  It has certainly been a serious effort to achieve and our dedicated team continue to put in the hard yards to ensure the best possible outcome for the Estate’s Thoroughbred Stud at this important auction.”

We kick off with three fillies;  Last Clouds by Soft Falling Rain out of a Var mare Easy Game.  This is Easy Game’s first foal and she is a very powerful,  speedy and precocious sor. The second filly is by Var and is the last foal from our grand mare Murmuration.  She is called Migration and is a correct, well-balanced, workmanlike individual  who should do her dam proud.  The last filly is Gifted Gal by Oratorio out of Academia. She is really strong for a filly and an imposing tough  sort.

Two colts by Silvano start off our list.  The first is called Rivano and he is out of champion race mare River Jetez.  With this exemplary pedigree the individual should deliver, and he has.  He is gorgeous and classic – a high quality horse in all ways.

Redmayne is out of Hannah Gorgeous who is a ¾ sister to Horse of the Year Futura and he is a suberb high quality colt who is correct, well-balanced and of outstanding quality.

Oratorio features in the colts list with a double whammy. First up is Ovation out of our champion mare Minelli. This is her last foal and he is the full brother to SA Gr 3 winner Cue the Music who has also gone on to win in Hong Kong.  He is classy with scope and a really attractive boy!  Oratorio also has another nice sort with State your Case out of Madam Justice who is the first foal out of the full sister to Horse of the Year Legislate.  He is a rugged, good-boned, easy-moving colt.

Two Var’s fill up the basket with Rowntree out of Candy Vous looking like a speed merchant.  He is a ½ brother to 4 winners and is a typically correct type.  Walker Bay out of Mantaray Bay is from this well-related imported female line and is a typical Var – flashy!

Avontuur has high hopes for the next colt as they’ve only ever had 2 Greys Inn colts to sell; Grade winner Canterbury Tale and  double  Horse of the Year Legal Eagle.  This colt by Greys Inn and out of Jeter is a gem.  He is called Litigation and is gorgeous, brave and just fabulous!

Our one and only Futura is a tall lengthy colt called Calluna out of Captured Time. He is closely related to Champion filly Beach Beauty and is a tall easy-mover.  We love giving first time sires a chance and this next colt called Manvir is by talented sprinter Red Ray out of Europe to Africa.  He is athletic and a racy type but definitely late maturing.

Alcazar is from the first crop of champion sprinter Rafeef and out of a Group 1 winning dam called Bambina Stripes. “What an attractive elegant colt – he might be slightly immature, but ticks all the boxes and will reward a bit of patience.”

“As always we want to express our gratitude to each and every supporter and buyer and look forward to seeing you all in Johannesburg in April as we host visitors in our lounge and show off the yearlings at the TBA complex with pride!” says Philip Taberer of Avontuur.