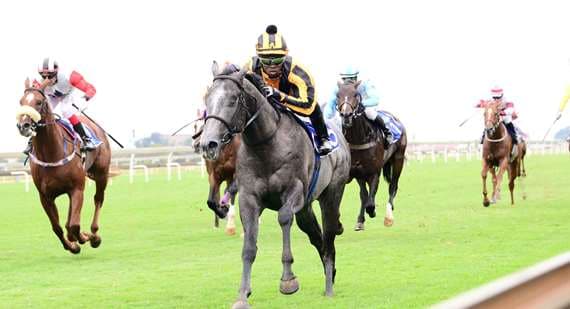 The son of Forest Wildcat has sired juveniles to either win or place in such prestigious South African 2yo races as the Gold Medallion, SA Nursery, Umkhomazi Stakes, Allan Robertson Fillies Championship, and the Golden Slipper.

Var has also sired the likes of Normanz, Twitter and Villandry – all of whom won the Gr3 Godolphin Barb Stakes at two.

Now, Var looks to have another potential Grade 1 juvenile on his hands in the form of Isca.

The latter made a stunning debut at Turffontein on Saturday when running off to claim the Listed Storm Bird Stakes in a canter.

Trained by Gavin Van Zyl, the flashy grey colt flew home to place two and a half lengths between himself and runner up Bazuca.

Isca, who was following in the footsteps of former Equus Champion Soft Falling Rain by winning the Storm Bird, was certainly a most fitting winner of the race – as his paternal great great grandsire is Storm Bird himself.

He looks a colt with the potential to go all the way to the top and is yet another top class prospect for his sire.

Var has made a stunning start with his juveniles in 2014-2015 and at the time of writing currently sits atop of South Africa’s 2yo sires list.

Other smart juveniles representing Var this season include the brilliant Juan Two Three, who is unbeaten in two outings and is another Var colt whose future looks to be in feature races.

Var, himself a former Champion Sprinter, is strongly represented at both the March Yearling Sale and National Yearling Sale.

At this month’s March Sale, Var has a draft of eight yearlings, which includes a filly out of the well bred stakes winner Toga (Lot 78) and a half sister to Gr2 Sceptre Stakes winner Reflective Image (Lot 88).

Var’s 31 strong draft on the National Sale includes a few gems, namely colts out of such well performed mares as Arcola, Classique Story, Gorongosa, Jet Trail and On Her Toes, and fillies out of the likes of Smangaliso and Wise Dame.

He is also the sire of lot 422 – a half brother to Gr1 Fillies Guineas winners Captain’s Lover and Ebony Flyer and a son of former Broodmare Of The Year Sunshine Lover.