Talk of the Town looking good and ready for action! 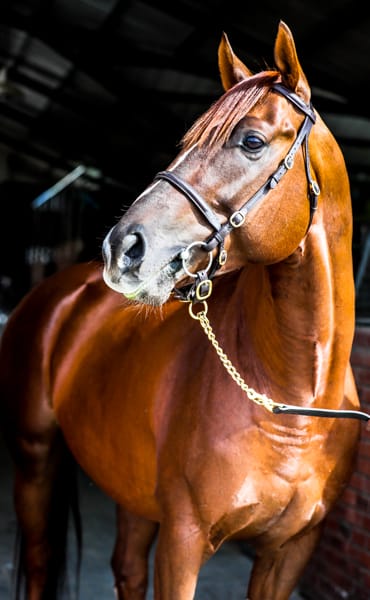 Avontuur welcomes Talk of the Town 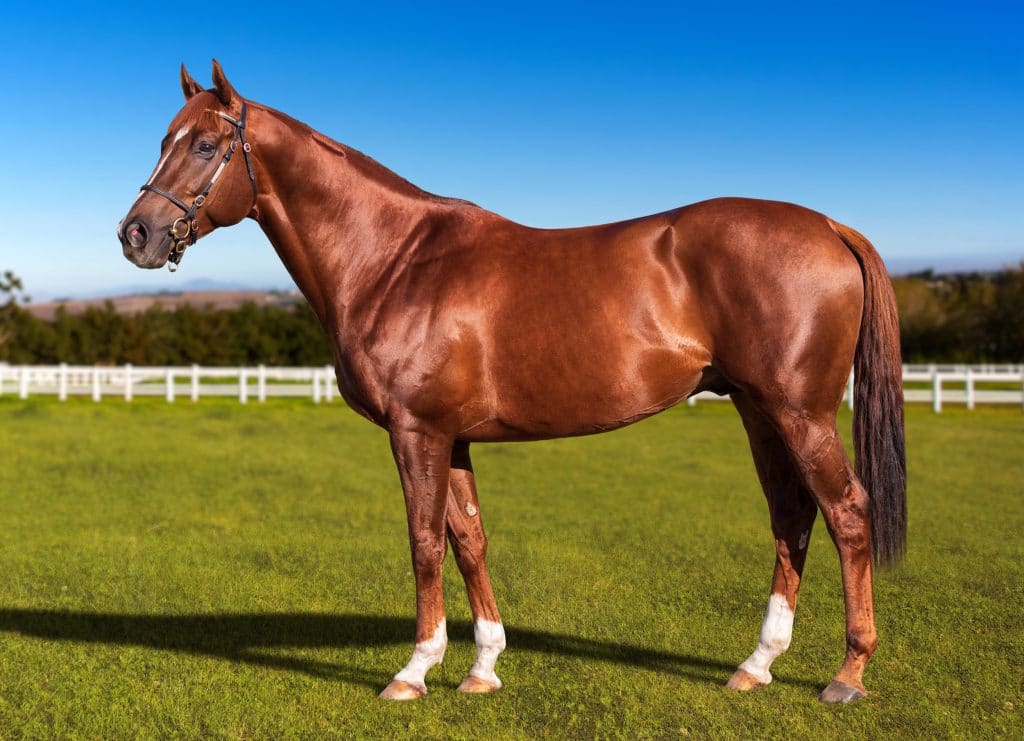 Media Release: Partnership announces exciting new SA stud addition – Talk of the Town 30 June 2020 First Son Of Var At Stud Is The Talk Of Town! Avontuur Estate’s Taberer family, in partnership with esteemed racing and breeding personalities, Ken and Jane Truter, is proud to announce the arrival of the first son of […]

First Son Of Var At Stud Is The Talk Of Town! 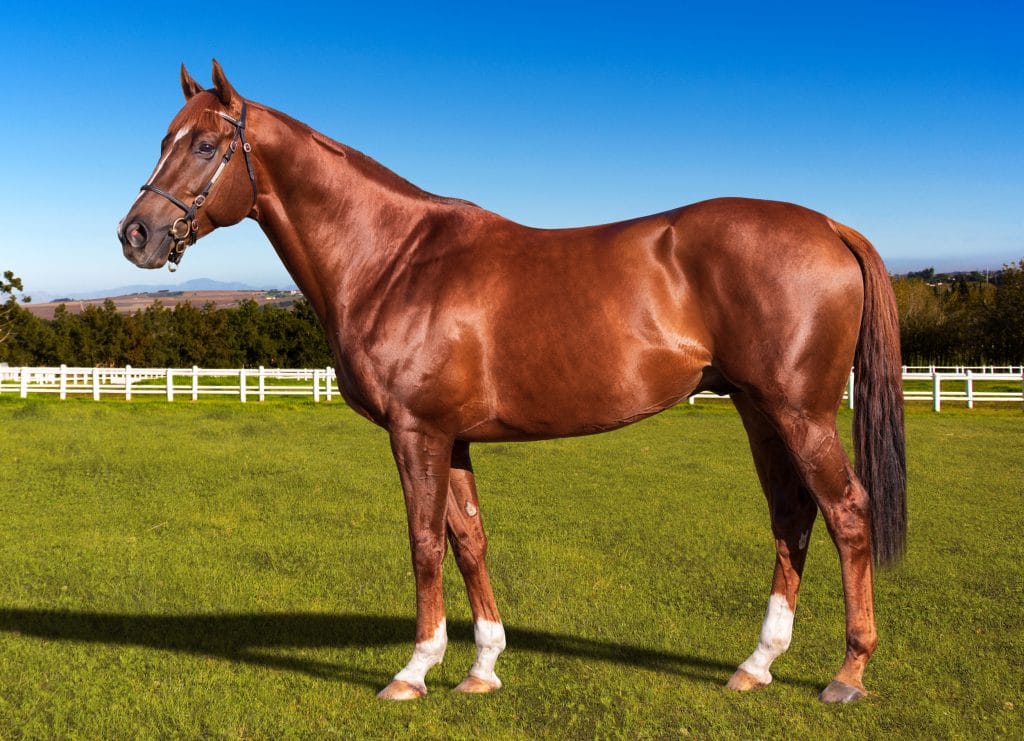 Get in now before he lives up to his name! Avontuur Estate’s Taberer family, in partnership with esteemed racing and breeding personalities, Ken and Jane Truter, is proud to announce the arrival of the first son of champion 2yo Sire Var (USA) at stud in South Africa. Based at Winterbach Stud, just across the road […]

Another Gr1 For Var 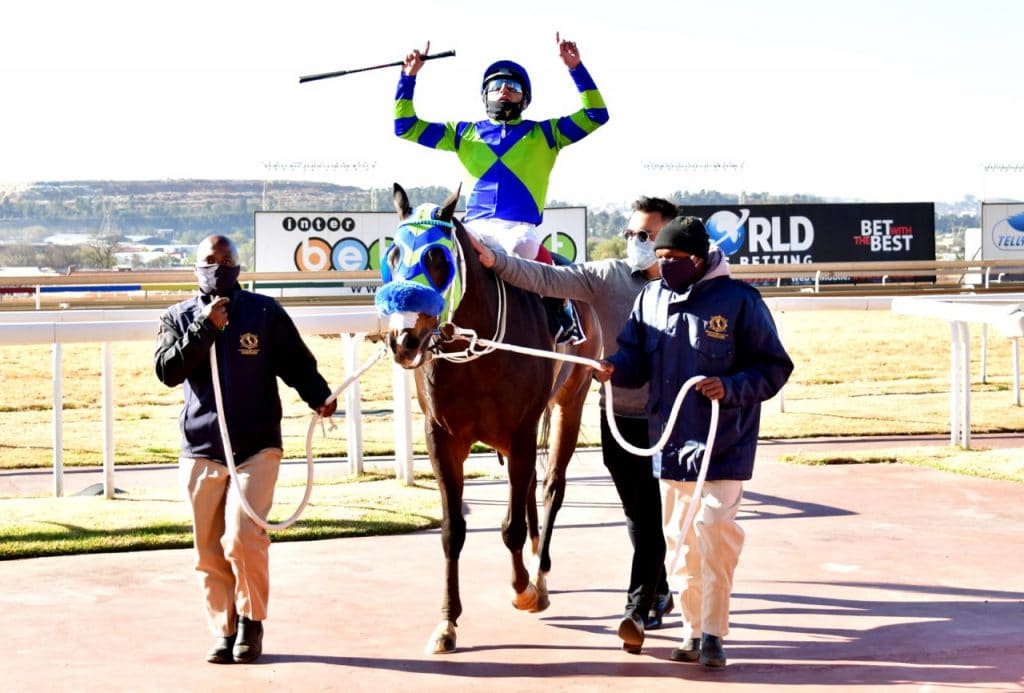 The beautifully-bred 6yo speedster Rivarine set up a potentially magic month for his evergreen sire Var and finally cracked his long overdue Gr1 credit when he put in the performance of his life to win Saturday’s R425 000 Computaform Sprint at long odds under Devin Habib. The Mike and Adam Azzie trained gelding has had […]

NYS 20 to be a very different Sale! 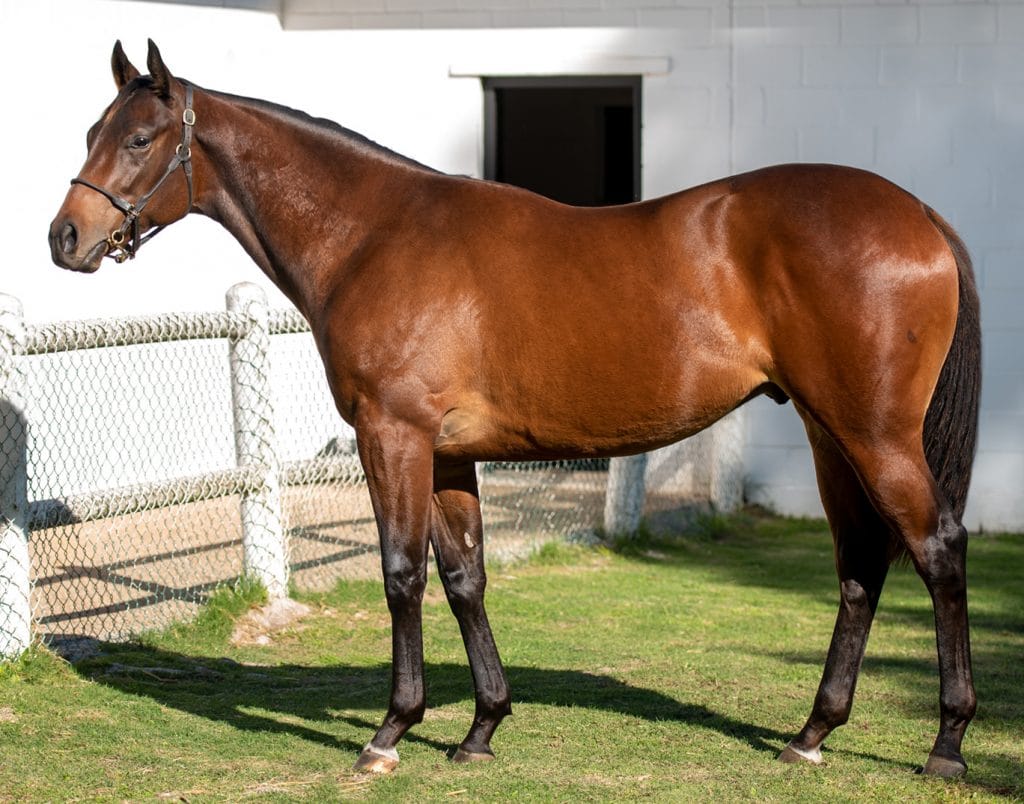 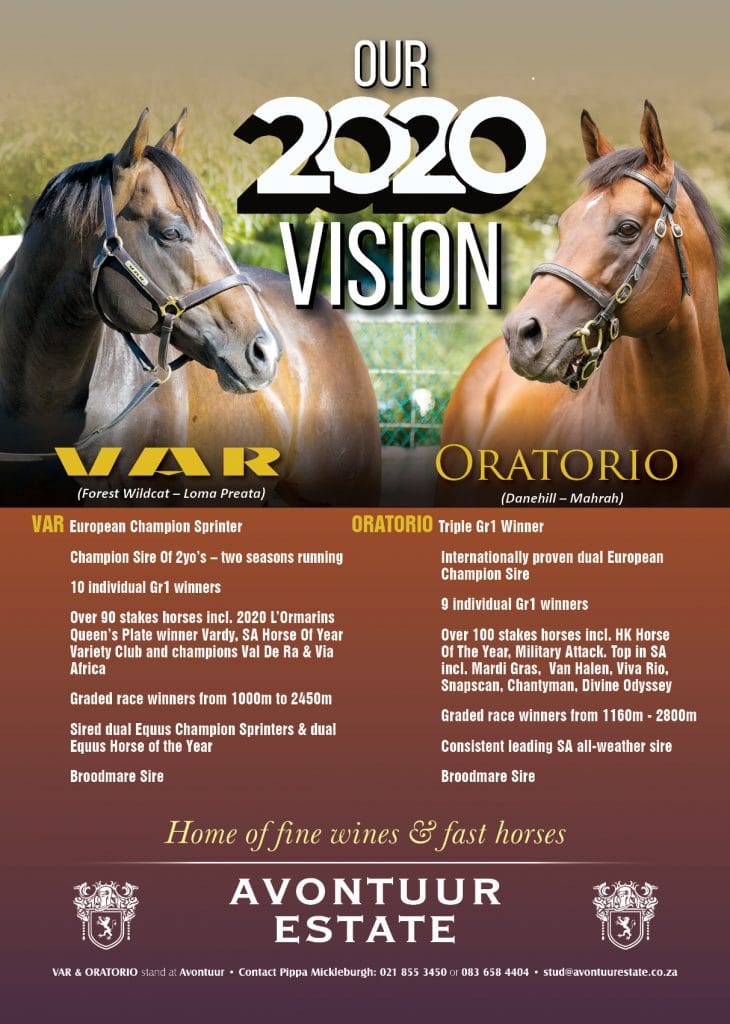 Following President Cyril Ramaphosa’s address to the nation last Sunday and in line with taking a responsible approach to the Covid-19 virus, there are specific instructions on public gatherings which need to be adhered to. As such Bloodstock South Africa has decided to postpone the NYS 2020 to 20, 21 and 22 May, although the […]

The group of Avontuur yearlings set for the National Yearling Sale in Gauteng in late April sport a list of sires which reads like the who’s who of South African thoroughbred breeding!  These obviously include our own Var and Oratorio and also two Silvano’s, a Soft Falling Rain, Rafeef and others. Comments Avontuur owner, Michael […] 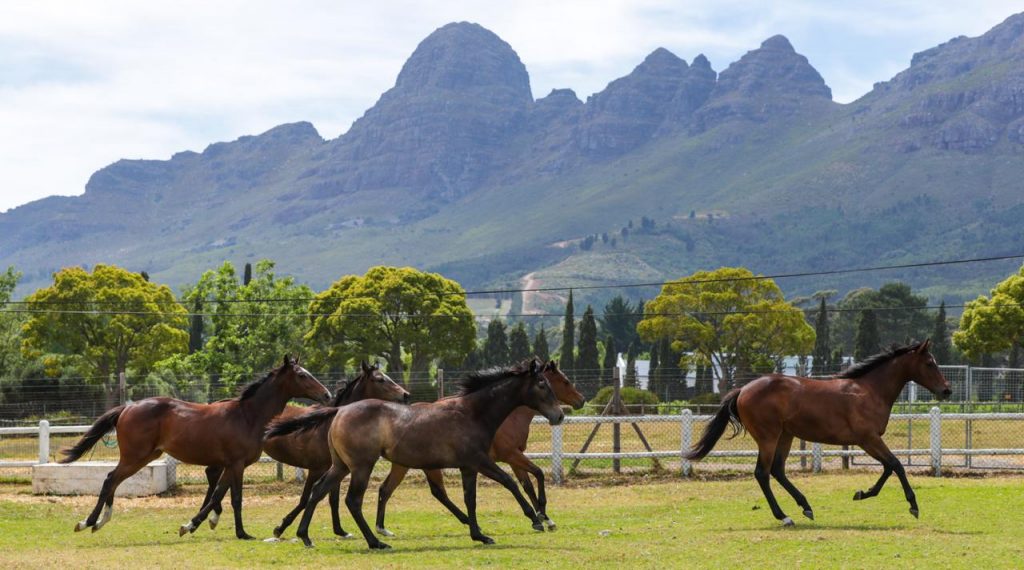 We’re already looking forward to the next important yearling sale which takes place from 22-24 April at the TBA sales complex in Gosforth Park, Johannesburg. 15 Yearlings, used to the freedom of our paddocks,   will take their first steps onto the big stage and we wish them well and hope for a successful Sale. […] 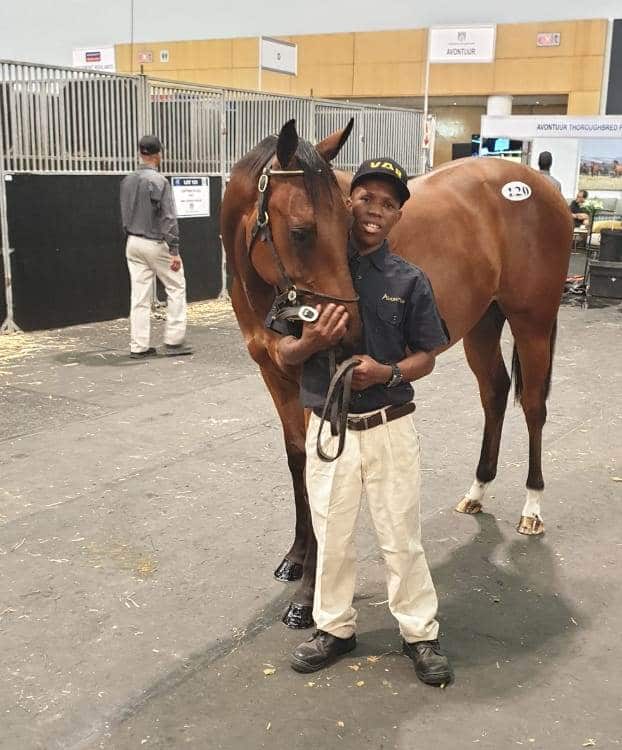 Avontuur’s “daughter of two champions”,  All that Jazz (Trippi x Val de Ra) was the top-selling filly at last week’s 2020 Cape Premier Yearling Sale and in another first, was also the first yearling to be bought for export to Australia via Mauritius and the UK.  Another filly who did extremely well for the farm […]

The full low down on each CPYS 2020 Yearling! 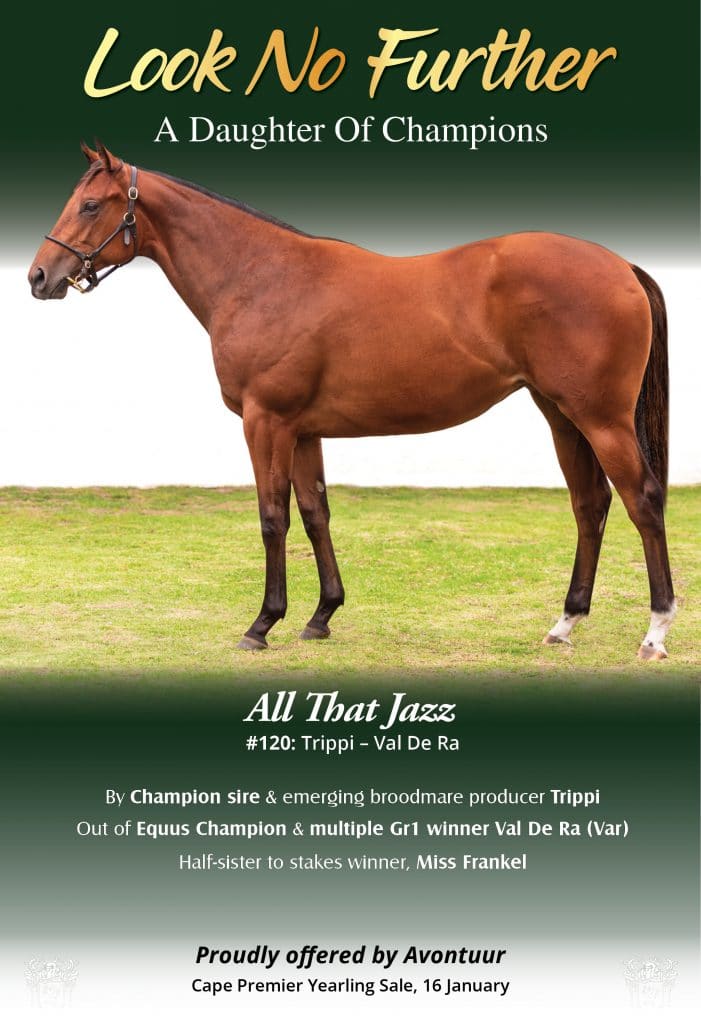 “Avontuur Thoroughbred Farm has horses for every buyer at the 2020 Cape Premier Yearling Sale,” said Avontuur’s Estate General Manager Pippa Mickleburgh. “Some time ago someone remarked to me that the so-called ‘small buyers’ don’t like to come to the major sales because the ‘big” buyers pick up all the best horses. But I’d like […]