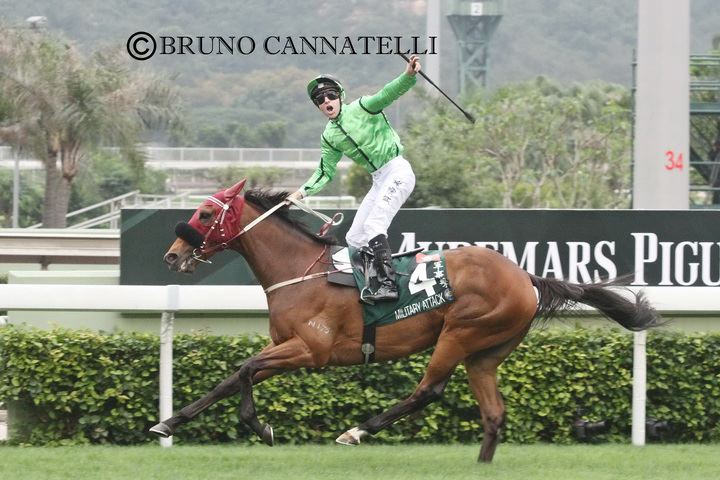 Berry, 22, has already snared the Golden Slipper and Doncaster Mile in his homeland this month and made it three top-flight triumphs for April with a copybook ride on the John Moore-trained five-year-old. Off a stop-start pace, the jockey settled his mount into a smooth tempo just behind the leaders and when the field fanned for home he was poised to strike.

“They really ran to the first corner – probably a bit quicker than I anticipated – but I just got my horse into a nice rhythm,” said Berry. “They backed it off and then quickened it up again going to the half-mile.”

With the leaders folding early in the home stretch, Berry sent Military Attack to the front half-way down the home straight. The gelding battled to see off runner-up California Memory and drew clear for a length and three-quarter triumph in a time of 2m 02.15s.

“I probably had to come out a little bit earlier than I wanted to but we got forced out, and watching the replays of this horse in the past he’s got a really long sustained run -he looked like a really nice horse and he showed that today. It was a beautiful training effort, I’ve got to say – perfect with a few weeks in between runs,” said Berry.

Moore, winning the race for the third time after Viva Pataca in 2007 and 2010, was ecstatic. The veteran handler has now guided Military Attack to three straight wins with this G1 victory following on from impressive wins in the HKG1 Hong Kong Gold Cup and last month’s HKG3 Premier Plate. Moore now has his sights set on the G1 SIA Cup in Singapore.

“Wow, I just need to pinch myself to understand what’s just transpired,” said Moore. “I think it was thanks to Zac (Purton) that we found out that we could vary the tactics on him and that made a big difference – instead of riding him out the back and have him closing off in these exceptional times. Tactically, we’ve got a very smart horse on our hands.

“It was a great ride by Tom today, he got him just in the right position and he had to kick a little early but he showed a lot of fight. I can’t be happier with this horse’s progress – he’s won his first Group 1 and now we’re off to Singapore!”

While Military Attack enjoyed a dream run, there were hard luck stories in behind with sixth-placed Ambitious Dragon the unluckiest of all. Zac Purton was just beginning to ask Hong Kong’s champion for a race-winning effort when his mount was baulked and badly impeded at the 250m as California Memory drifted off a straight course. The interference cost the Tony Millard-trained runner any chance of a second APQEII Cup win to sit alongside his 2011 triumph.

And as that drama unfolded, Japan’s Eishin Flash, anchored at the tail from gate 13, surged home late down the inside fence under Mirco Demuro to finish third, a nose behind Tony Cruz’s two-time G1 Hong Kong Cup winner California Memory. Godolphin’s G1 Dubai Duty Free heroine Sajjhaa, having missed the kick and then travelled four wide under Silvestre de Sousa, ran a brave race in fourth.

Berry has now notched six G1 wins in all this season and is contracted to ride for the Hong Kong Jockey Club until the end of the current campaign on 10 July.

“It doesn’t get much better than this,” he said. ‘I’m only 22 and I don’t think I’ll be able to beat what I’ve done in the last 12 months in my whole career. But that comes with a lot of support from a lot of great owners and trainers in Australia and now Hong Kong.”

“On the sporting front, I’m very happy with the result,” he said. “It was a great day of racing and a fascinating race. We had a little incident, which made the whole thing for Ambitious Dragon probably ‘mission impossible’ but I think we should not take the credit away from Military Attack – it was a terrific performance. It’s probably one of the best APQEII Cups we’ve ever had, ratings wise, and the depth of talent in the field today reflects the quality of Hong Kong racing.”