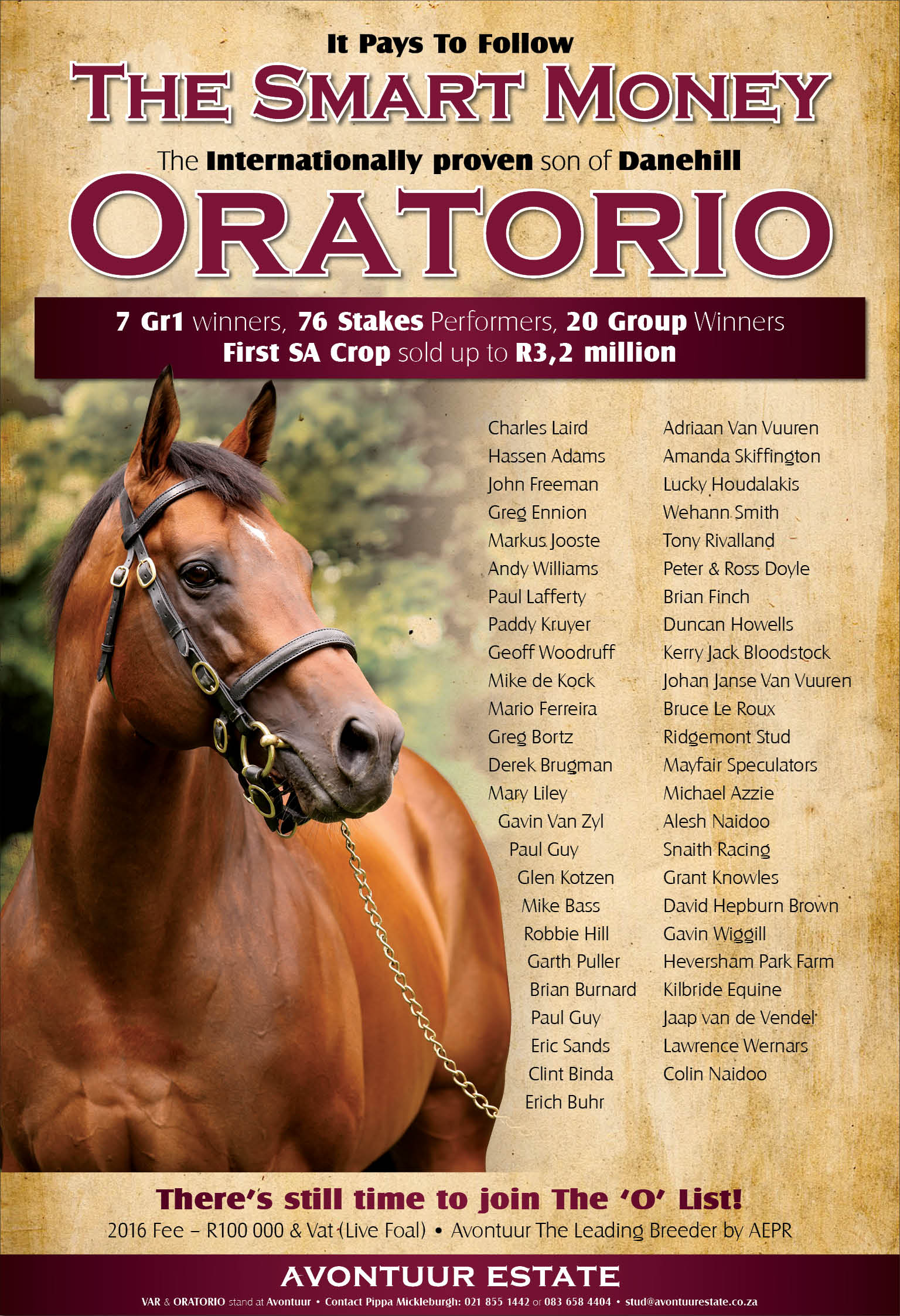 Avontuur Thoroughbred Farm once again look to have an outstanding draft of yearlings on offer at the 2018 Emperors Palace National Yearling Sale next month.

The farm, whose past National Sale graduates include dual Horse Of The Year Legal Eagle, will be represented 15 top class yearlings at the April sale.

A possible standout could well be Watershed (Lot 13) –with this bay colt being a son of the great sire Dynasty and out of champion Pocket Power’s G1 J&B Met winning own sister River Jetez. The latter has already left her mark at stud as the dam of G3 winner Rivarine.

Avontuur’s resident sire Var, SA’s Leading Sire Of 2YOs in 2016-2017, has four lots in the draft. Among them is Serenity (Lot 98) –a bay daughter of G1 SA Fillies Classic winner Bambina Stripes, and Beautiful Mind (Lot 210) –a full-sister to brilliant filly Schiffer.

Standing alongside Var at Avontuur is European champion and proven G1 sire Oratorio. The latter has five yearlings in the draft, headed by Cassimbo (Lot 58) a colt out of a stakes winning daughter of the outstanding sire Cape Cross, Valetorio (Lot 62) –a half-brother to 4 winners including G3 winner She’s A Giver, and Vivant (Lot 69) –a half-brother to five winners including the brilliant G2 winners Cold As Ice (also a winner in Britain) and Live Life. The latter has earned over R4.6 million in stakes thus far!

Oratorio also has fillies out of the smart race mares Varikate (winner of the G2 Merchants) and Without Malice, in the forms of Before The Dawn (Lot 310) and Ode (Lot 327) respectively.

Jet Master’s son Master Of My Fate has made a smashing start to his stud career and the big bay is the sire of Sea Scape(Lot 26) –a grandson of G2 Prix Robert Papin winner Ocean Ridge, while former champion sprinter Captain Of All has two in the Avontuur draft- including Aye Aye (Lot 498) –a beautifully bred half-sister to 7 winners, headed by G3 Byerley Turk hero, and big race contender, Mambo Mime.

Four time G1 winning European champion Twice Over has made an explosive start to his stud career and he is the sire of Double The Fun (Lot 418). The latter is a half-brother to four winners, headed by smart stakes winner Milady.