A Tale of Two Cities: Oratorio triumphs twice on one day! 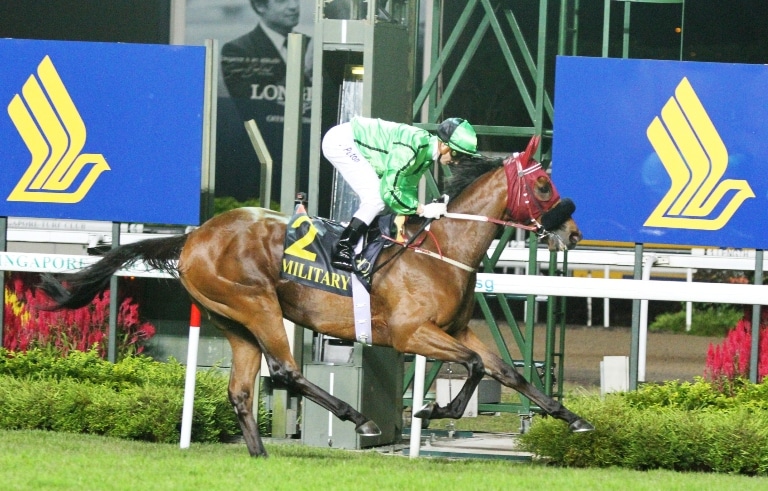 Trainer Stefano Botti rewrote the history of the Italian Derby when saddling the first three home in yesterday’s Classic at Capannelle, Biz The Nurse (Oratorio) outclassing the field to score by four lengths from Wish Come True (Aussie Rules) and Ancient King (Ramonti).

“I was pretty confident before the race that all my five horses were in perfect form but I rated Biz The Nurse the best of them,” said Botti, elder brother of Marco.

Biz The Nurse settled comfortably off the pace set by Best Tango and the British raider Boite. Jockey Andrea Atzeni asked Biz The Nurse to quicken 500m from home and the colt responded with a nice turn of foot. Entering the last 200m they went clear and kicked again, while Wish Come True finished well to beat the prominently- ridden Ancient King. Lodovico Il Moro finished fourth while Best Tango and Fairy Nayef, the first two in the Gr.3 Premio Parioli, failed to stay.

“I had a very good trip and was on a very good horse. He quickened well when I asked him and won with some gas left in the tank. I want to thank Stefano Botti who provided me this fantastic opportunity,” said the Italian- born Andrea Atzeni, who was winning his first Classic.

Stefano Botti added, “Biz The Nurse is a special horse, a champion. I have liked him since day one; he is strong and very professional. He ran just one bad race on soft ground in the Gr.3 Premio Berardelli.

“He came through the winter very well and I planned to run him just once before the Derby. Everything went according to plan. He could stay a bit further and now we have to decide his future.”

Massimo Crecco, owner of Scuderia Aleali, was winning his first Derby on his first try. “Onofrio Saia, who trained my horses at that time, made a good choice when picking him up at the ITS Sale. I paid €40,000 for him,” said Crecco, whose other horses have included Lucky Chappy, a Listed winner in Italy and multiple Group- placed in US for Team Valor.

Biz The Nurse was bred by Massimo Parri’s Le.Gi. and is the first foal out of Biz Bar (Tobougg), winner of the Listed Criterium Femminile. The nine-year-old broodmare, from the female line of the dual Gr.1 winner and sire Niniski, has a two-year-old by Ivan Denisovich, bought back for €19,000 at the SGA Selected Sale last year, and a yearling colt by Arcano.

Hong Kong runners landed both Gr.1 races on Kranji’s biggest day of the year. Lucky Nine (Dubawi) set the ball rolling with an impressive victory in the International Sprint, bursting clear just over 200m from home and landing the spoils by three lengths for his second internationally-recognized Gr.1 win. He was followed home by the Australian-bred Bel Sprinter (Bel Esprit) and New Zealand-bred Super Easy (Darci Brahma), while the Irish challenger, the Edward Lynam-trained Balmont Mast (Balmont) was a close fourth in a bunch finish for the places.

Trainer Caspar Fownes commented, “He’s been unlucky overseas in the past but he’s shown what he can do tonight. The pressure was on after his last run so I’m glad it’s worked out; the owners have been great.”

Lucky Nine has now won seven Stakes races up to a mile since being shipped to Hong Kong after his maiden win at Naas as a two-year-old, and this 1200m seems to be his best trip. The Darley-bred gelding, a €9,000 yearling purchase by Andrew Oliver at the Tattersalls Ireland September Yearling Sale, has now earned well over £3m in prize money. His dam Birjand (Green Desert) was exported to Japan, where she has also produced two Group-placed winners by Storming Home, and is a daughter of the 1994 Irish Gr.1 winner Belle Genius (Beau Genius).

Military Attack (Oratorio), known as Rave when winning three times in Britain for John Hills, was the equally-impressive winner of the Gr.1 International Cup over 2000m, scoring by three and a quarter lengths from the former Irish-trained Dunboyne Express (Shamardal), now known as Dan Excel and a Gr.1 winner earlier this month.

The German-bred but now Australian-trained Mawingo (Tertullian) was a close third and Jane Chapple-Hyam’s Mull Of Killough (Mull Of Kintyre) a good fifth, but the favourite Pastorius (Soldier Hollow) faded badly in the straight and only beat one home.

A possible trip to Royal Ascot was mentioned by the winning trainer John Moore but he appeared to consider Australia as a more likely target for his winner, saying, “This was an emphatic win and I’m absolutely ecstatic. There is Royal Ascot and the Prince Of Wales’s Stakes but I would love to win a Group One in Australia. I shall talk to the owner and consider giving the horse a break, then getting him ready for the Cox Plate.”

Military Attack has now won four in a row, also including the Gr.1 QE II Cup at Sha Tin at the end of April. The five- year-old was bred by P E Banahan and is out of Al Bahathri’s daughter Almaaseh (Dancing Brave), a 41,000gns Tattersalls December Sale purchase by Moortown House Stud back in 1991. The mare has also produced the Gr.3 winner Almaty and Listed-placed Salee among her eight winners, and is the grandam of Gr.1 winner Red Cadeaux (Cadeaux Genereux), who was unplaced in this race.